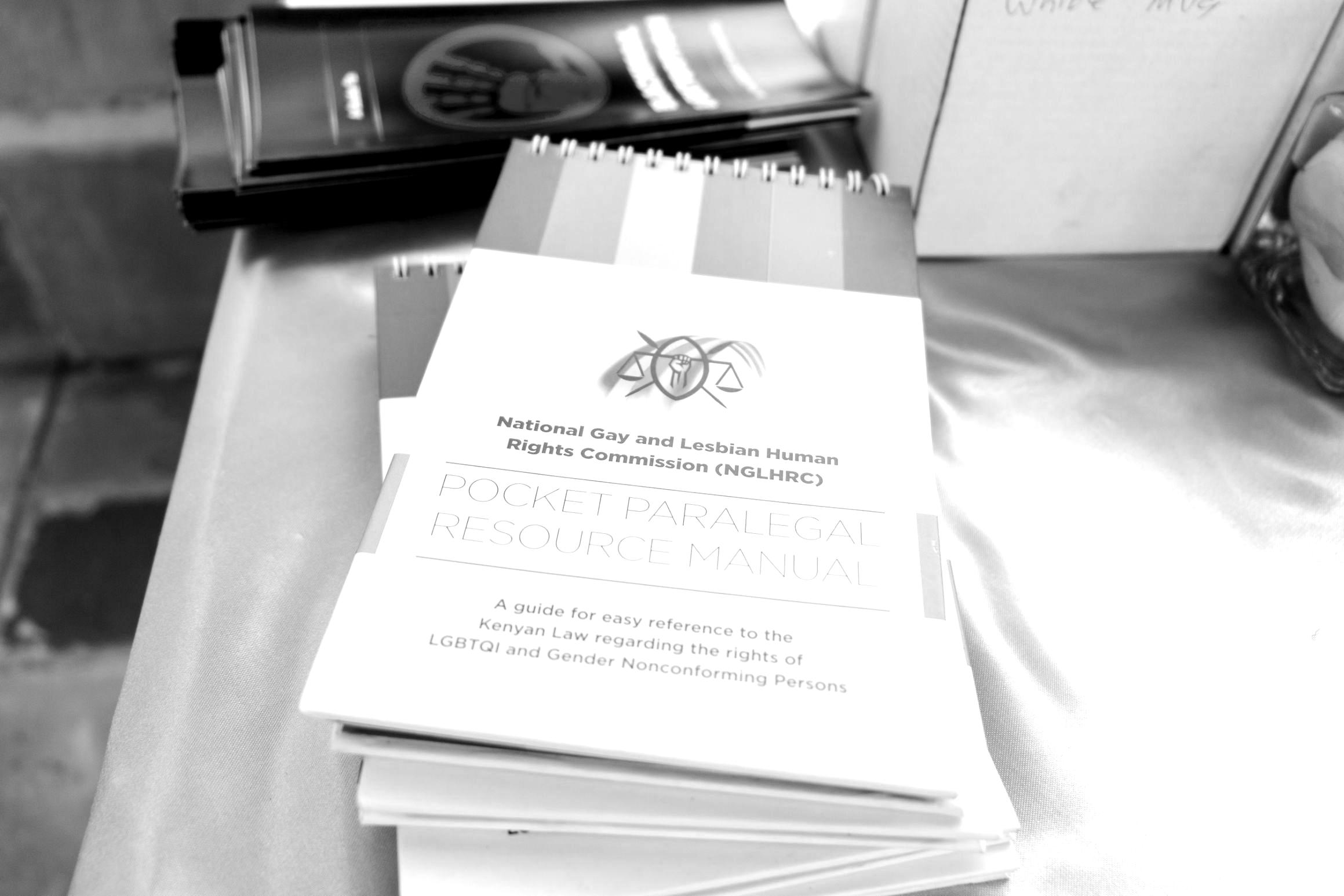 Protect the Lives and Rights of LGBTIQ+ Persons in Kenya

The Lesbian, Gay, Bisexual, Transgender, Intersex, and Gender non-conforming (LGBTIQ+) community in Kenya continues to face stigma, and human rights violations, including torture, inhuman and degrading treatment and murder. Against this gloomy background, we stand in solidarity with the LGBTQ+ community and loudly say ‘Our Bodies, Our Lives, Our Rights Matter!’’. Read The Full Statement Here

REDRESS and the National Gay & Lesbian Human Rights Commission (NGLHRC) make this submission to draw the Committee against Torture’s attention to the issue of discriminatory violence affecting individuals identifying or perceived as LGBTIQ+ in Kenya (paragraph 33 of the List of Issues)1. This submission is based on our extensive experience working against torture and on LGBTIQ+ issues in Kenya. Read The Full Submission Here.

Joint Statement on the Brutal Murder of Sheila Lumumba

On 17th April 2022, Sheila Lumumba, a 25-year-old queer, non-binary person, was
found dead in their apartment in Karatina, Nyeri County. The autopsy conducted by the
Government Pathologist report released on 20th April 2022 shows, among other things, signs of rape, broken limbs and multiple stab wounds in the neck and chest area. As LGBTIQA+ persons, communities, organizations and allies are horrified and deeply saddened by the circumstances around their death. We come together to condemn these heinous acts in the strongest terms. We commiserate and grieve with the family of our departed sibling and active member of the Kenyan community and commit to standing by them in demand of justice for Sheila. In the same breath, we decry a visible pattern as indicated in various research studies and anecdotal information by the LGBTIQ community of targeted violence against sexual and gender minorities and the lack of prosecution and impunity for perpetrators of homophobic/transphobic violence. We urge the Directorate of Criminal Investigations to move with speed to arrest and the identified suspects prosecuted. Read the Full Statement here.

On February 14th 2022, in Nairobi County, Education Cabinet Secretary is quoted as saying, “I said if you are a homosexual in a boarding school and you are hopping from a bed of another student to another, your rights end there.” This quote was part of a more extensive speech where he uses homophobic and stigmatizing language to give context to his discrimination, homophobia, biphobia and transphobia of LGBTIQ+ students in his comments from December 30th, 2021. Worryingly, the CS has now added sexualization of LGBTIQ+ children to his repertoire. Read the full release here.

On December 30th 2021, in Kisumu County, Education Cabinet Secretary said, “children who are homosexual and lesbian … must go to day schools close to their homes.” The CS stated that this move would “protect the greater majority of learners.” These remarks by a government representative are highly concerning, considering their intensely discriminatory and homophobic nature.

The Cabinet Secretary’s utterances are in utter violation of Article 10 (2b) of the Constitution of Kenya which holds among the National Values And Principles Of Governance “human dignity, equity, social justice, inclusiveness, equality, human rights, non-discrimination and protection of the marginalised”; In addition to Article 27(4) that outlines “The State shall not discriminate directly or indirectly against any person on any ground, including race, sex, pregnancy, marital status, health status, ethnic or social origin, colour, age, disability, religion, conscience, belief, culture, dress, language or birth.” He also infracts the word and spirit of several international treaties and declarations to which Kenya is a signatory. With his utterance, the CS proves that government players instigate homophobia which then creates an environment that allows for violence against members of the LGBTIQ+ community.

NGLHRC executive director said, “such statements demonstrate what we have been saying for years, that stigma, discrimination, and violence against the LGBTIQ+ community begins at a very early age fueling a myriad of long-term issues, including but not limited to deteriorating mental health.” The Education CS is a trained health professional with a wealth of information at his disposal and should be aware that sexual orientation is innate and immutable and him requiring that learners be treated differently on grounds of their sexuality is not only unconstitutional but unacceptable and has no place in a democratic state such as ours.

LGBTIQ+ Kenyans have hopes and aspirations just like other wanainchi. Like other Kenyans, we have the constitutionally guaranteed right to access rights and privileges assured us in the constitution. However, Kenya cannot achieve Socioeconomic progress if one group is continuously marginalised. If the government intends to meet its 2030 goals, make progress on the Big 4, and reach its Sustainable Development Goals landmarks, discrimination and exclusion of LGBTIQ+ persons, both systemic and otherwise, needs to come to an end. To LGBTIQ+ learners who have been the subject of this attack, we recognise that these utterances have brought much distress and sympathise and empathise with you. We give you our assurance that we are watching the situation and will continue holding the government accountable.

Between July 2020 to June 2021 the Commission has received and handled 619 cases reported by LGBTIQA+ persons across the country. There has been significant increase in the number of cases, this could have been due to the ongoing pandemic. Covid-19 rendered quite a number of our constituents jobless and with no means of survival hence they had to go back home and were stuck with either abusive partners or abusive family members. This therefore resulted in cases of intimate partner violence, evictions, family rejections, economic indignity, discrimination and stigma among other cases. Read the full Legal Aid Report here.

Read the publication of our 2019-2020 annual report, with a summary of the year’s activities, our programmatic growth and a message from our Executive Director on the year.

Click here to download a copy of our Annual Report. You can also view a short video summary of the same here.

Kindly contact our office to request a downloadable copy of our second Annual Report at info@nglhrc.com

The Human Rights Situation, Case Law, and Research on Protections on Grounds of Sexual Orientation, Gender Identity, and Expression in the Republic of Kenya (2017) joint submission to the Office of the Independent Expert on protection against violence and discrimination based on sexual orientation and gender identity (UN)

In response to the Call for Inputs issued by the Office of the Independent Expert on protection against violence and discrimination based on sexual orientation and gender identity, this submission outlines the human rights situation of members of the lesbian, gay, bisexual, transgender, and intersex community in the Republic of Kenya (Kenya). In particular, this submission discusses the following underpinnings: i) decriminalisation of consensual same-sex relations; ii) effective anti-discrimination measures; iii) legal recognition of gender identity; iv) destigmatization linked with depathologisation; and v) socio-cultural inclusion. Read the full report here.

The Paralegal Resource Manual is part of NGLHRC’s ongoing work to enhance access to justice and bring to life the constitutional right of public participation of LGBTIQ individuals living in Kenya. The Paralegal Resource Manual is meant to increase knowledge of the rights entitled to LGBTIQSOGIE (Queer) persons by the Constitution of Kenya and understanding of the functioning of the judiciary system.

Click here to download a copy of the Paralegal Resource Manual. A few printed copies are also available by request at our offices.

Click here to download a copy of the Pocket Paralegal Resource Manual. Printed copies are also available by request at our offices.

Read the first publication of our annual report, with a summary of the year’s activities, our programmatic growth and a message from our Executive Director on our 2016 year.

Click here to download a copy of our Annual Report. Printed copies are also available by request at our offices.

A summary of legal aid cases referred to NGLHRC in 2016 for violations against LGBTQI individuals throughout Kenya.

The Outlawed Amongst Us: A Study Of The LGBTI Community's Search For Equality and Non-Discrimination in Kenya (2011) by The Kenya Human Rights Commission

The study finds that human rights violations against LGBTI persons in Kenya are systematic, highly prevalent and generally not redressed by the state when called to. There is a high prevalence of violence upon LGBTI persons who are routinely abused, subjected to hate speech and incitement to violence, suffer physical violence in terms from mobs and occasionally raped by police, vigilantes and organized criminals. Read the full Report here.